Before the war, the small forest in France known as Belleau Wood was not memorable in any sense. The United States Marines had that in common with Belleau Wood; they were not distinguished in any particular sense, either. Lying 45 miles west of Paris, Belleau Wood was approximately the size of New York’s Central Park, about a square mile. It was an old hunting preserve with spectacular views of the surrounding wheat fields. Unfortunately, the forest was so thick with the brush that it was nearly impassable. In addition, there was a deep gorge that ran through the woods, which made it difficult to cross. It was, however, a strategic position that the Germans held and from which they were planning to launch their advance against Paris. If Paris fell, Europe would likely follow, and without the aid of the Americans, the war was lost.

The Great War had begun in 1914, and from afar, Americans followed the news of the back and forth of the aggressive regime of the Germans, sending wave after wave of assaults against the French and British. President Wilson tried to keep the U.S. neutral, but the hearts of most Americans identified with the Allies and feared that Germany would eventually conquer all of Europe. With the sinking of the passenger ship Lusitania by a German U-boat, followed by the discovery of the Zimmerman telegraph, where Germany was communicating with Mexico to invade the U.S., staying neutral was no longer an option. By 1917 the collective war casualties were staggering, surpassing millions, and it was clear that the war would soon end, but there was no certainty of who the winner would be. On April 6, 1917, the U.S. Congress declared war on Germany.

The Sunday edition of the Colorado Springs Gazette (April 29, 1917) carried the headline “The U.S. is at War, So Let’s Fight.” In the article, former President Theodore Roosevelt said this to the millions of young men considering joining the military “when you hit a man, strike him hard.” Known as the hero of San Juan Hill, Roosevelt was a man of legendary courage and integrity, which only grew after a would-be assassin shot the fifty-eight-year-old Roosevelt in the chest in October 1917. He had been giving a lengthy speech but staying true to his public persona of manliness; he continued with his speech and left the platform unattended. Theodore Roosevelt tapped into the spirit of nationalism building in America. American troops were excited to see action and wanted to participate before the war ended. The Allies’ last hope of winning rested solely on the emergence of American soldiers.

Seventeen-year-old Jack Callahan was looking for adventure and the thought of being one of the “first to fight” appealed to him. The Callahans were a well-known family in Troy, New York, and they were particularly proud that Jack had graduated from Troy High School, where his father was a well-loved teacher. Jack’s two sisters, Marie and Helene, had hoped that Jack might consider following in his father’s footsteps and becoming a teacher. It was, however, difficult for young men to ignore what was happening in Europe. On April 6, 1917, the day Congress declared war, an excited Jack Callahan enlisted in the U.S. Marine Corps. In a letter to his parents, he said, “Parents, don’t worry about me, for I am coming back soon.”

Thirty-eight-year-old Sergeant Arthur Russell had grown up in Oshkosh, Wisconsin, formerly a lumberjack. Since 1906, however, Arthur had been in and out of the Marines serving as a leatherneck on different ships and a drill instructor in Quantico. He believed the Marine Corps training was the finest and had confidence in leading his men at Belleau Wood. An expert marksman, Arthur trained his men to be proficient with their weapons too.


Hundreds of thousands of young men and women enlisted or were conscripted through the national war mobilization efforts. Newly trained soldiers and sailors were either assigned duties assisting the Allied Forces or became part of an American regiment. As a result, many young men quickly found themselves on the front lines to relieve the exhausted Allied fighters. The mission was to hold the line and push the Germans back, and it became clear that even with the help of the Americans, victory was not inevitable. The gut wrenching fear was if the German war machine broke through the lines and captured Paris, the Allies would likely surrender. Forty miles east of Paris, four German divisions occupied a thick forest and waited for the right moment.

Perched on a hill and protected by boulders large enough to protect them from gunfire, the Germans were confident in their position. They had been at Belleau Wood for several days and had time to dig in, learn the area, and prepare for any attack. Most importantly, they set up a network of machine-gun nests. The task for the Allied forces was to clear Belleau Wood of enemy forces. The assault would be a deadly one, a daunting challenge for any army to launch, and that mission was given to the United States Marine Corps. It would mark the first time the Allied Forces relied upon the United States for offensive purposes. The fate of the war was to be determined by the untested Marines.

The Germans had been fighting on both the Western and Eastern fronts, but Russia’s new Bolshevik government had sought a peace treaty with Germany, which, in turn, freed up German units fighting there. The Germans transferred those additional 50 German units to the Western front and hoped it would be enough to overwhelm the Allied forces in France. The Germans had been making progress since March 1918, and it was generally felt that German troops could potentially be in Paris within days, if not stopped.

With the arrival of fresh American troops in time, the German offensive slowed and eventually stopped. As the Marine troops arrived on the front lines, the exhausted French retreated, telling the Americans to turn around and head back to where they came. “Retreat?” said the Marine Captain Lloyd Williams, “Hell, we just got here.” When it came to Belleau Wood, the Marine Strategy was to fight “line abreast,” the old-fashioned way to re-take Belleau Wood. Heavy American guns tried to soften the Germans before the Marine troops advanced through the wood. As Marines launched their attack, they met with veteran German soldiers (of the Russian front) hiding in the machine gun nests, and as the Marines got closer, the Germans let rip. Some Marines fought through the machine-gun fire and established a small foothold, but it cost many lives.

The battle began around the 1st of June and continued until June 28, 1918. During that time, the Marines attacked the entrenched Germans five times and were beaten back each time. Finally, on the 6th attempt, the Marines drove the Germans out and took control despite the German Air force continued dropping of bombs on them both night and day. Allied forces had been retreating to Paris, but the word of the success of the Marine Brigade renewed hope and inspired the French and British to carry on. The battle lasted nearly a month, and by its end, 1,811 U.S. Marines were dead; this number was more than all the Marines killed in its 143-year history. The Marines had saved the Allies from defeat and delivered a physiological blow to the Germans — their first encounter with American fighting men. 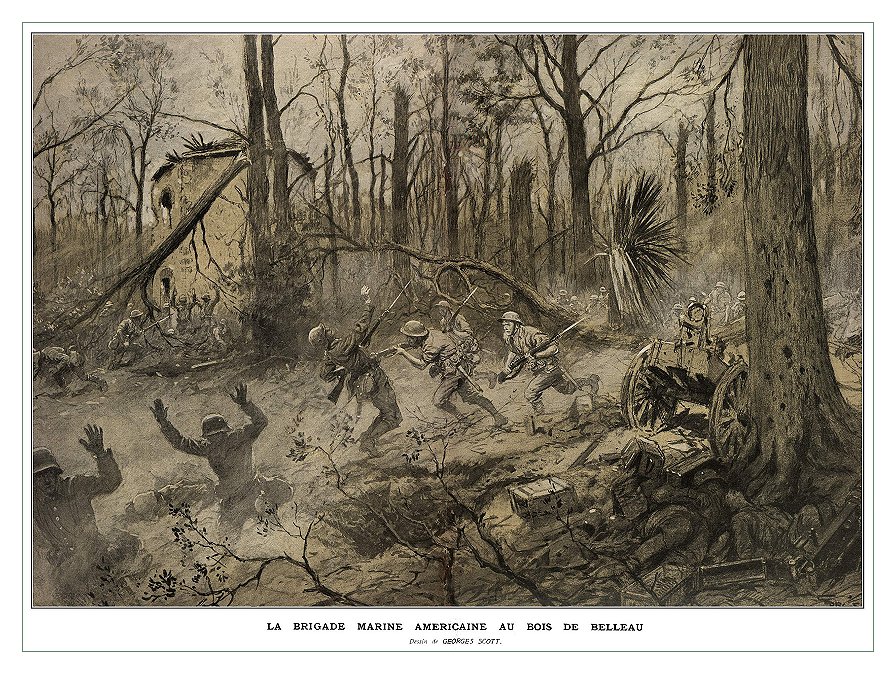 The commander of the US First Division, Robert Lee Bullard, described the win aptly: “The Marines didn’t win the war here. But they saved the Allies from defeat. Had they arrived a few hours later, that would have been the beginning of the end. France could not have stood the loss of Paris.”

Belleau Wood was an unlikely place to host the most significant battle of World War One, and the Marines were an unlikely player. Referred to as the “soldiers of the sea,” the Marines were created when sea power ruled the world. Their original purpose was to protect U.S. Navy ships against enemies and belligerent shipmates. By 1908 President Theodore had little use for the Marines and tried to eliminate them, but they survived and have gallantly redefined themselves over the last century.

The casualty lists that rolled in week after week displayed the names of hundreds of other former clerks, bakers, printers, factory workers, tailors, fathers, sons, and brothers. During the Great War, over 10 million men lost their lives on the battlefields of Europe, and another 13 million civilians also perished due to war-related issues. In the case of Private Jack Callahan and Sergeant Arthur Russell, sadly, they never saw home again and were killed at the Battle of Belleau Wood.

The Battle of Belleau Wood clearly announced to the German nation that the Americans had arrived and were ready to fight. The glorious legacy of the U.S.Marines began at Belleau Wood and continues to this day.